The Milton brewery is a traditional English Ale brewery, albeit lurking in the cunning disguise of a 1980s industrial unit.

All our ingredients are of the finest quality since with the iniquitious British tax regime, the Chancellor of the Exchequer receives a bigger contribution from the price of your pint than we do. Consequently, the price of the ingredients is a small proportion of the overall cost of a pint and therefore only a fool uses cheap ingredients. 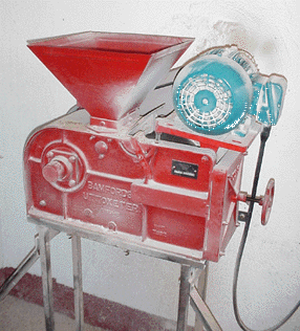 The malted barley is milled on-site in our grist mill (see left). Milling on-site results in the freshest possible flavours and ensures high levels of quality control. It also gives us the flexibility to produce individual and distinctive beers all year round.

Milled malt, known as grist, is mixed with hot brewing water, known as liquor, in our custom-made pre-masher. The porridge-like mixture spends one hour in the Mash Tun where the starch in the grist is converted into fermentable brewing sugars. 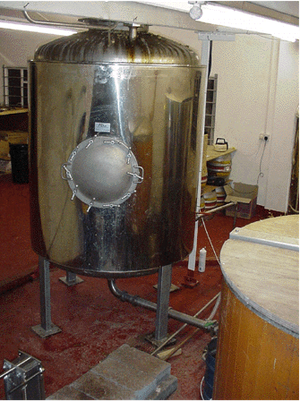 The sweet wort, as it is now known, is run-off through the Under-back into the Copper (so called for the obvious reason that it is made of stainless steel — see right). The copper, which is effectively a large kettle, can boil 15 barrels (540 gallons, 2452 litres) in one go. When the wort is boiling the hops are added. Different beers use different amounts and varieties of malt and of hops in the recipe. Cyclops, our strong ale, uses three different malts and four different hops.

The boil lasts at least one hour and extracts the flavour and bitterness from the hops. The wort is then crash-cooled to room temperature and transferred to the fermenters. We have three fermenters ranging in size from twelve (432 gallons, 1961 litres) barrels to thirty barrels.

Top fermenting ale yeast is added (pitched) into the freshly cooled wort. The yeast feeds on the sugars in the wort producing carbon dioxide and alcohol! 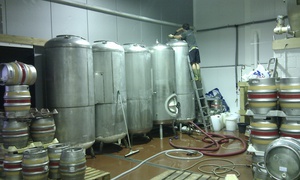 After three to five days fermentation is complete and the beer is transferred to 3000 pint maturation vessels. The beer spends at least one week here to ensure that when transferred into casks it reaches the pub in perfect condition — every time!